The judicial activity in Nagaon district has been playing a significant role in administering justice in the district. The district judiciary is divided into two co-related divisions with two separate heads. The divisions are both known as the “Judges’ Court” and “CJM’s Court”. The first court, where both Civil and Criminal matters are judged and decided is headed by the District & Sessions Judge while the second court, where criminal cases only are decided is headed by the Chief Judicial Magistrate. Both these two divisions comprise the district judiciary that is subordinate to the Honourable “The Gauhati High Court” at Guwahati and the District & Sessions Judge is empowered as the head of the district judiciary as well as sessions division. 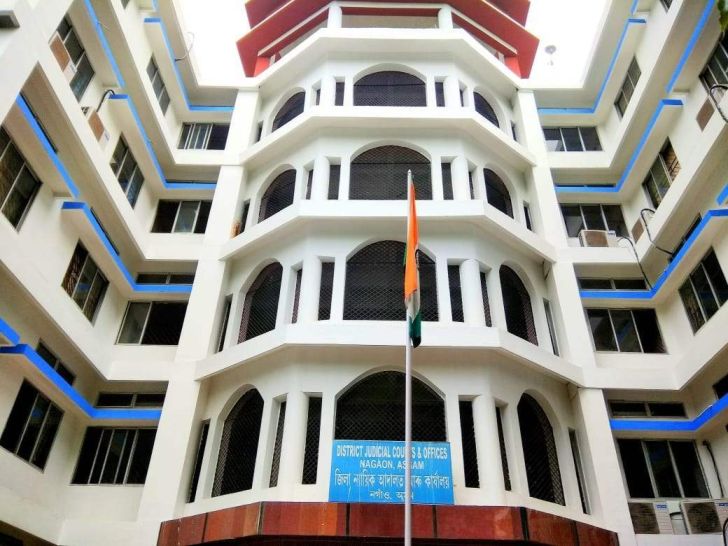 The Nagaon Judiciary is enriched with glorious history. At first, two Civil Courts namely- the Court of the Munsiff and the Court of the Sub-Judge(Mafasal) were established in the district. The latter had to administer Justice in then undivided Nagaon district (later divided into Nagaon and Morigaon districts) and in some parts of Karbi-Anglong and Sonitpur districts and thereby accomplished a Herculean task indeed. The Munsiff Court decided the cases of Civil Matters. Both the said Courts were run under the supervision of the Honourable Gauhati High Court, Guwahati. However, the dignified post of District & Sessions Judge was created in 1967 and the Judges have accordingly been appointed by the Honourable High Court, Guwahati.

Previously, the Criminal Courts were controlled by the District Magistrate/Deputy Commissioner prior to the amendment of the Cr.P.C. 1973. The case of the criminal courts was then tried by the Addl. District Magistrate (Judicial.). Since 30 July 1974, the Honourable High Court, Guwahati has been appointing the Chief Judicial Magistrate in the district for administering Criminal Justice. Since then as many as 19 Chief Judicial Magistrates were seen to have been working in the District and mentioned may be the name of the first one is Md. Abdul Mazid. It is heartening to note that our first C.J.M. has become a member of the Human Rights Commission, Assam. The distinguished name of the Honourable C.J.M is on the record. Regarding the formation of the District Judge Court, the history traced back to 1967. It is pried that as many as 4 District Judge were elevated to the coveted post of the Honourable Judge of the Gauhati High Court. They are Sri D N Biswas, Sri PG Agarwal, Sri S K Kar, and Sri I A Ansari and their Lordships are dispensing Justice with many calibers.

When it comes to the selection process, the candidates have to take up a written exam / Interview. Selected candidates will be paid a handsome salary (as per Govt rules). The type of questions that are asked in the technical interview round differs from one position to another. There are multiple steps for the selection process for the posts of Stenographer, Clerk, Peon, Process Server, Gardner, Chowkidar, Liftman, Sweeper, Watchman, Cook, etc. in the Nagaon Court. The procedure is as follows

We advise to you for Nagaon Court Recruitment 2021, How to Apply, Selection Process, Age Limits and other details please read given official recruitment notification carefully before apply online or Offline.

Know the current status of your case by Return SMS

Important: Case Number Record (CNR) is a unique Identity Number of each case, which remains constant. All the Advocates, Litigants, and stakeholders are requested to ascertain the CNR of their respective cases from the concerned Courts and to refer the same for all future references.